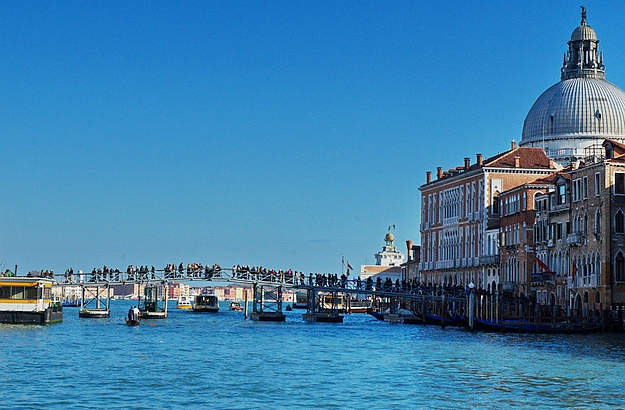 People have often asked me: “What is the best time of year to visit Venice, Katharina?” And invariably my answer has been: “Off season, especially in wintertime. And if you want to see the Serenissima in its most vibrant and transcendent mode, you should set your heart on November 21st.”

Every year on November 21st, Venetians reclaim their city with intense fervour on the occasion of the unique Madonna della Salute festival, instituted in the 17th century to commemorate the end of the horrendous plague that devastated Venice in 1630 and 1631. After buying a votive candle and patiently queuing up outdoors, thousands of locals inch their way, in turn, into the Basilica di Santa Maria della Salute, a beautiful baroque church located on the opposite bank of the Grand Canal – right in front of our Palazzo Ca’nova – and in the precinct of which they let their chants and prayers soar in poignant waves.

Speaking of the Grand Canal, an ephemeral 80-meter long bridge, the Ponte Votivo, is erected across its waters every year, from the 18th to the 22nd of November, in order to allow the faithful to flock directly to the Basilica from the rest of the city.

And here’s another piece of information that will probably render you speechless – my own jaw dropped when I heard this: Santa Maria della Salute was built, in the 17th century, on a platform made of no less than 100,000 wooden piles!

Well, 100,000 piles probably was a mere trifle compared to the desolation that the 1630 plague had left behind… The pestilence had struck Venice before, in 1575, and as is the case for Santa Maria della Salute, a church, the Redentore, was erected in remembrance of the city’s rebirth after the terrible ordeal.

Venetians, however, have their own special way of blending the tragic, the sacred and the wordly, and a very good example of this is the scramble to the castradina, a warming meat soup which the locals enjoy in convivial company at the city’s food stalls after their November 21st devotions at the Basilica. A soup which, by the way, is eaten only on this day!