Tuscan Cuisine Gets One More Star 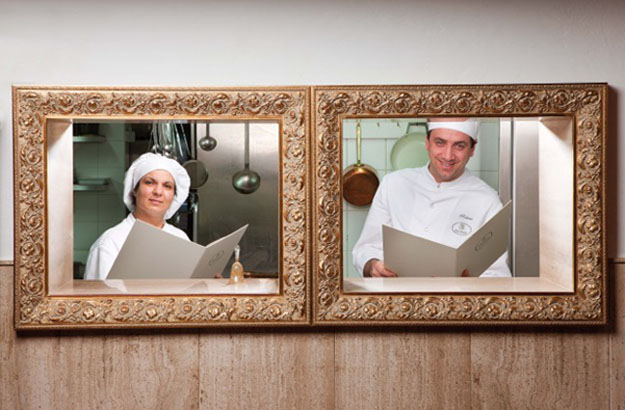 October 2014… One month which Roberto Rossi, chef and owner of Il Silene, will not easily forget about.

“I’m the happiest man on Earth, Katharina! he carolled to me, waving his hands, when I dropped by Il Silene in late October.
– You seem to be! What happened?
– My wife gave birth to our baby boy, and my restaurant got a Michelin star! A Michelin star, Katharina, can you believe this?
– Wow, congratulations, Roberto! And what will be the boy’s name?
– I am considering Michelino, what do you think, Katharina?… ”

Hmm… In honour of Domenico di Michelino, the Italian Renaissance painter? Or perhaps to celebrate the Michelin star? I coaxed Roberto into considering another name for his newborn.

I discovered Il Silene after a day spent skiing on Mount Amiata in Southern Tuscany. I don’t think I have ever mentioned to you that there is a small skiing resort on this extinct volcano. Of course its snowy top cannot rival Northern Italy’s skiing arenas. Nevertheless, it does boast a “black run” and two chair lifts, and offers a breathtaking view of quintessential Italy: Umbria, Lazio, coastal Tuscany.

But back to my obsession with food… One of the local friends we had been skiing with that day suggested we should have dinner in one of Tuscany’s best restaurants: Il Silene. All we had to do is drive a few kilometers down to Pescina, a hamlet lying on the road that takes you from Vivo d’Orcia to Seggiano and Castel del Piano. Fine with me, let’s go!

I was advised to try the delicious scottiglia, one of Il Silene’s great specialties, almost always featured on the restaurant’s seasonally varying menu. It is Southern Tuscany’s version of a stew. A great tasty dish! And proof that Michelin stars are now also awarded, in Italy, to chefs who draw their inspiration from local tradition and produce.

Roberto Rossi and his team also run the Non Solo Eat Art restaurant located in Daniel Spoerri’s sculpture garden near Seggiano. Founded and established by the Swiss artist more than 15 years ago, this remarkable garden now features over a hundred installations created by 50 different artists. Perfect for daydreaming strollers, it is also a great place to visit with kids – I will soon post an article with detailed information about it.

For Il Silene, advance booking is recommended: +39 0564 950 805 / info@ilsilene.it
You can also find Roberto’s scottiglia recipe here in Italian and here in English.