Overview of the Le Gore

Set within the bucolic countryside of Southern Tuscany and at the foot of the idyllic medieval village of Cetona, Le Gore is a six-hectare estate of fields, olive groves, cypress trees and local vegetation and is home to two separate villas.

The estate was bought by a lovely family in the 1990s. They restored it in grand style under the supervision of one of their daughters, a talented architect who gave the traditional buildings a completely new lease on life. She was also in charge of redesigning the garden, which provides guests with perfect privacy while showcasing splendid views over the surrounding landscape of rolling fields. The olive trees one can see in the near distance are used to produce the estate’s own olive oil. A caretaker couple, and their dog and two cats, live in a home on the estate.

The villa is a mere 2.5 kilometers from the charming hilltop village of Cetona. Found between the regions of Tuscany, Umbria and Lazio, the town lies roughly equidistant between Rome and Florence. Human presence in the area goes as far back as the neo-Paleolithic period. Evidence of the Prehistoric, the Bronze Age and the Etruscan era can be viewed in the Belvedere Park, the Museo Civico per la Preistoria del Monte Cetona and the nearby Parco Archeologico Naturalistico del Monte Cetona.

Cetona is ideally situated for exploring the cultural points of interest of Southern Tuscany and further afield. Nearby is the Val d’Orcia, a UNESCO World Heritage considered one of the top natural wonders of Tuscany. The beautiful valley is home to exceptional towns such as Pienza, Montalcino and Montepulciamo where world-famous wines like Montepulciano and Montalcino are produced. This makes for lovely excursions. Even closer by are  the towns of Città della Pieve and Chiusi —  which are within a 15 to 20 min drive of Cetona. Active pursuits in the area include hiking. biking, golf at Lamborghini-Panicarola and various watersports on nearby Lake Trasimeno. Lastly, in only an hour or two you can reach Siena, Florence, Perugia and Rome. 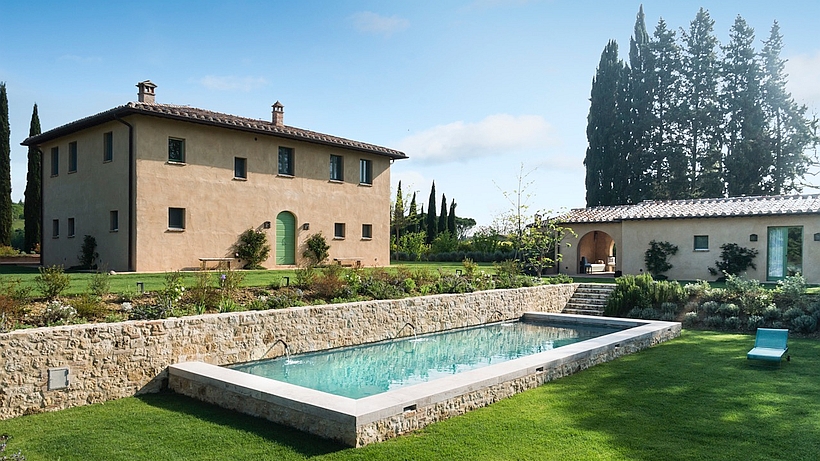 Le Gore estate is 2.5 kilometers, walking distance, from the lovely medieval hilltop town of Cetona where guests can find shops, cafés and restaurants. It is situated in a beautiful part of Tuscany midway between Florence and Rome.

There is great hiking and biking in the vicinity of the villa. Within half an hour guests can reach the 9-hole golf course Golf Lamborghini, located in Panicarola and built by the creator of Lamborghini cars, Ferruccio Lamborghini as well as beautiful Lake Trasimeno, where you can swim and do a variety of watersports.