Overview of the Villa Gioli

In the summers of a century ago aristocrats and academics from the ancient University of Pisa, as well as naval officers from the nearby port of Leghorn retreated to their patrician country residences rising on the gentle hillsides shouldering the city of Pisa. One of these, the Villa Gioli, was built in the 1700’s. Originally a hunting lodge, villa Gioli acquired its present style and dimensions in the second half of the 1800’s when the brothers Francesco and Luigi Gioli, descendants of a wealthy aristocratic family from Pisa, whose life was dedicated to the arts, added the tower which was to become the artists’ atelier at their country house villa in Tuscany.

This was the golden era of Italian impressionists, known locally as the “Macchaioli”, derived from “macchia” which means as much as dot or stain and is a reference to the impressionistic stroke of the brush. This powerful, though at the time controversial, movement embraced some of the leading painters of the day, many of whom had studied in Paris. This was a time when artists were venturing beyond the confines of their studios into nature and the constantly fluctuating light and colours of the surrounding countryside, breaking with academic traditions, seeking new frontiers. There was a pressing urge to congregate among fellow artists to exchange ideas and derive strength from each other’s inspiration. Matilde Bartolommei Gioli, wife of one of the two artist brothers, offered these striving artists a haven. Intelligent, cultivated and well-read, she flung open the doors of the Villa Gioli to the most avant-garde artists, intelligentsia and writers of the time. Among these Fattori, Lega, Signorini, Kienerk and Cecconi came and stayed in the villa Gioli for many a long summer.

The present owners, the Marquis Cerrina Feroni family, are direct descendants of the Gioli brothers. The spirit of those times has remained to this day. 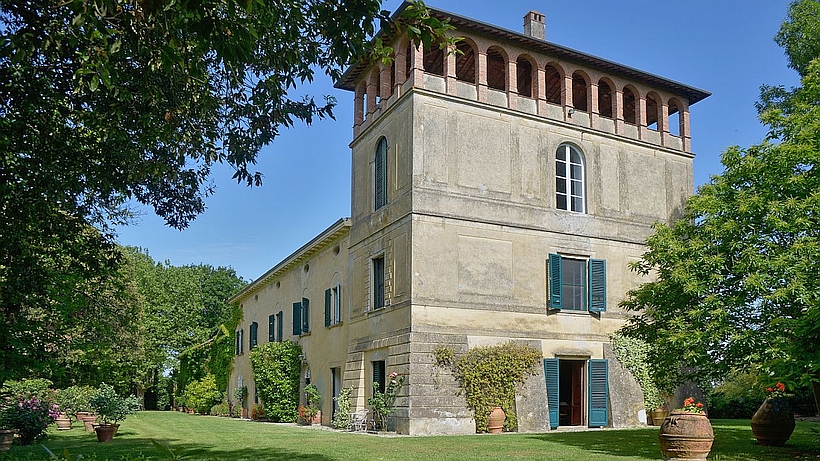 Lucca: At forty five minutes by car from Villa Gioli, Lucca is one of the most enchanting towns in Tuscany. Whether you stroll along the wide avenues cresting the top of the ancient city walls or wander through the narrow streets punctuated by its ninety nine churches, visit one of the richly endowed museums or browse among the old-fashioned little boutiques, sip a cappuccino at one of the many traditional coffee houses and sample some of the best ice cream in Tuscany, this is a sheer delight.