The Magrano estate lies within a broad bend of the river Chiascio near the medieval city of Gubbio in Umbria. This region is justifiably described as the “green heart of Italy.”

The estate spreads over 1500 acres (600 hectares) of meadows and woods, offering a variety of paths for hikes, horse riding and – most exciting – the search of white and black truffles with specifically trained dogs (we can organise this for you). Signposted paths completed by instructions given by the owner will open up this nature reserve to you, where you will be able to see deer, roe, porcupines, wild boar and pheasants.

However, Umbria’s cultural and gastronomic abundance is not far. Landmarks such as Gubbio, Gualdo Tadino, Nocera Umbra, Perugia and Assisi can be visited in half or full day trips.

Amidst a beautiful untouched countryside stands the castle of Magrano. First mentioned in the early Middle Ages (1200 ac) playing a strategic role in the defence of Gubbio against Perugia, in the 15th century it became one of the favourite hunting lodges of Federico da Montefeltro, Duke of Urbino and Gubbio. His famous profile portrait by Piero della Francesca hangs in the Uffizi Museum in Florence.

A few centuries later, in 1830 to be precise, Princess Giulia Bonaparte, niece of Napoleon, became the new mistress of Magrano. Remo and Maria Camilla Giunta, the charming actual owners, are her direct descendants. 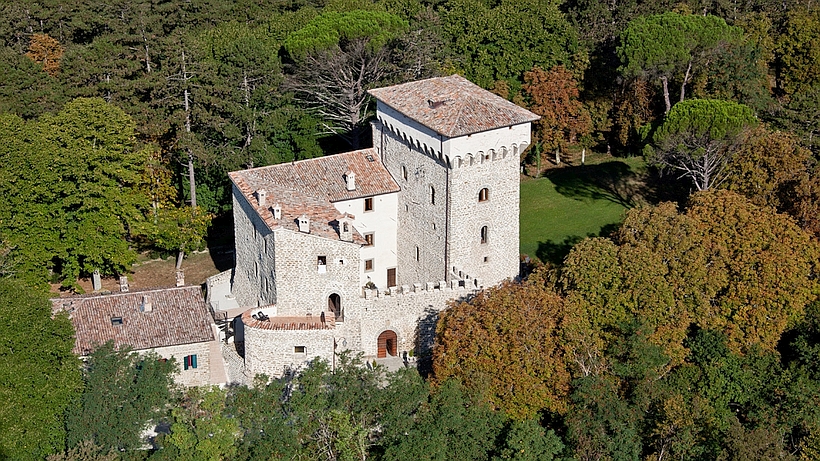 The Castello di Magrano lies at 5 minutes by car from the village of Carbonesca and a 30 minute drive from Gubbio.