Overview of the Villa Valmarana

Villa Valmarana ai Nani is a marvellous architectural and artistic site above Vicenza composed by three buildings and 18th century park. Vicenza is a lovely 20 Minute walk down 18th century steps covered by a vault. By car you will be downtown in 7 minutes.

The three buildings – the Palazzina (Owners’ Residence) (1669), the Foresteria (Guest-House) and the Scuderia (Stables) (1720) – are surrounded by a park divided into a “giardino all’italiana” with dovecote and picturesque well, a hornbeam alley which leads to a Pagoda in the woods.

This not being enough, from Villa Valmarana you can take a footpath which leads you to one of Palladio’s most famous villas, La Rotonda.

Back to Valmarana: The Palazzina and the Foresteria are world famous for their frescoes by Giambattista and Giandomenico Tiepolo, hired in 1757 by Giustino Valmarana. The frescoes were made in a little over 4 months.

The Villa takes its name “ai Nani” (which means dwarfs) from the statues of the 17 stone dwarfs on the walls surrounding the house.

The Valmarana family still lives in the Villa, which is universally considered the highest expression of the painting of the eighteenth century and one of the highest examples of the Tiepolo’s genius.

Villa Valmarana’s gardens and formal reception rooms are open to the public between the beginning of March and the beginning of November, the gates close at 6 pm. Sometimes the villa is let for weddings or similar. 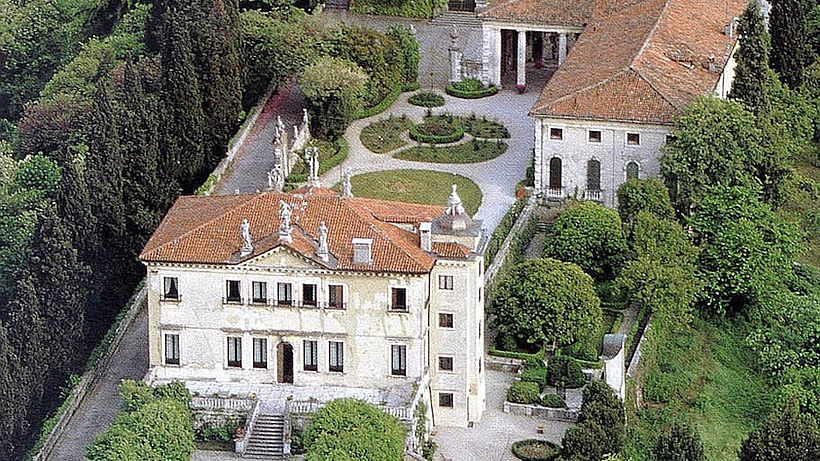 Villa Valmarana ai Nani lies up in the hills above Vicenza, door to door with another world famous villa, Paladdio’s La Rotonda. You can walk down to the center of Vicenza in 15 minutes.