The Tuscan Abbey without a Roof 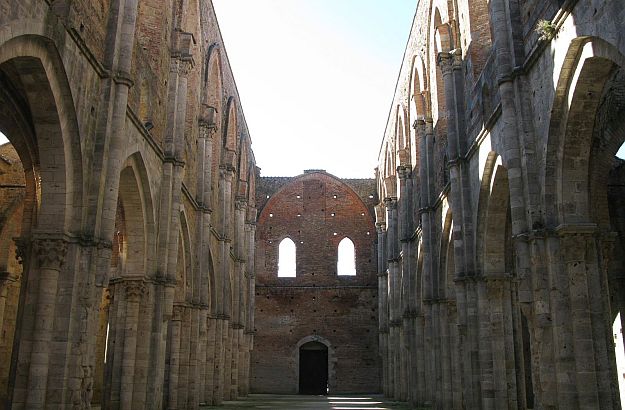 Some road works seem to take forever to be completed… Have you ever had that feeling? This is the case with the still unfinished Superstrada 223 linking Siena to the city of Grosseto and my beloved Maremma, a highway which was already under construction when I moved to Italy to start working at the Brolio winery…two decades ago!

Always very busy during the high season, this road was nonetheless jammed a few weeks ago when I was driving on it in the middle of an ordinary weekday of January. Since I was in no particular hurry, I decided to forsake the “speedway” to take a secondary road, a very scenic one, and make a detour via Monticiano. On the way, I remembered that I would be driving past the superb San Galgano abbey, which I had not seen for many years. An abbey without a roof!

Here’s the story… Built in the 13th century by the Cistercian monks, the San Galgano monastery soon became, after its completion, a key religious center in Tuscany. Made of travertine stone and Sienese bricks, it is a little marvel of gothic architecture. At the end of the 18th century, however, a lightning bolt smote the bell tower and made the roof collapse. A roof which has never been rebuilt since.

After visiting the abbey, walk up the trail leading to the nearby Pieve di Montesiepi, a beautiful countryside church with a striking rotunda. Another jewel of medieval architecture. From the top of the hill, you will be able to enjoy a breathtaking view of San Galgano and the surrounding valley.

If you can, take advantage of the quiet of winter, as I did, to avoid the larger crowds of the high season!

PREV
NEXT
PREV
NEXT
RENTALS CLOSE BY
MOST POPULAR POSTS
NEWSLETTER