A Ghost Abbey in the Heart of Tuscany 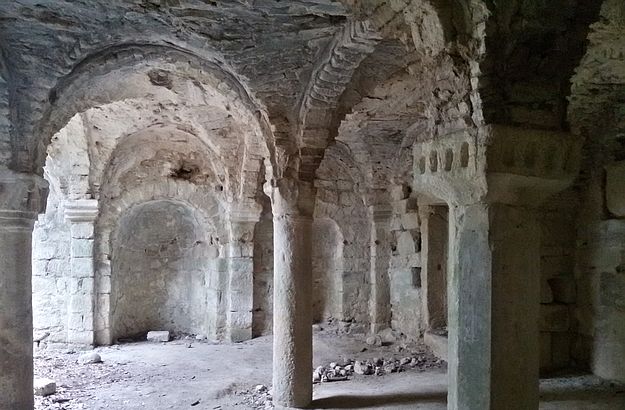 Where on Earth had we landed?… A frolicsome sprite, hidden somewhere behind a decrepit stone wall, replied to me in a hushed voice: “In the depths of the Middle Ages, in a world long sunk into oblivion…” And my daughter – who had been devouring a Harry Potter book lately, – looked up at me with her round, sparkling eyes:
“Mummy, did you hear that little voice?”
“What little voice, darling?…”

Actually, we had just ventured into the ruins of the little-known Abbazia di San Salvatore di Giugnano, a church and monastery which had been in use in medieval times before falling into relinquishment and decay. While the beautiful and well-preserved San Galgano and Sant’Antimo abbeys are familiar to travellers appreciative of religious landmarks, the San Salvatore vestiges have remained to date such a well-kept secret that they usually go unnoticed.

These ruins lie in the countryside near Roccastrada, a municipality located in the Tuscan province of Grosseto, about 90 kilometers south of Florence. A fairy-tale playground is the first thing we saw when we arrived on the premises and got out of our cars. The children – we had come there with friends of ours and their two young boys, – happily jumped onto the old swings and had a whale of a time for five or ten minutes. Then we all followed a small trail into the woods and caught sight, after a short walk, of an old ladder leading down into a bewitching underworld: the subterranean Romanesque crypt of the long-forgotten abbey.

We were marvelling at the geometric and zoomorphic patterns of the columns’ capitals when a friendly young man – in the flesh, not a phantom, – appeared behind us. He told us that he lived in the small house next to the playground and that he was always happy to give impromptu tours to the few adventurers who managed to ferret out the unwonted site.

Thanks to this young man’s enlightenment, we learned that the former Benedictine abbey was originally subordinate to the San Salvatore monastery of Mount Amiata, before falling within the jurisdiction of the San Galgano abbey in the early 13th century. Later on used as a mining site, it became the home of Augustinian monks for about a hundred years, then was deserted and left to decay for some obscure reason.

You will find on this web page a map giving directions to the ghost monastery. I just hope you’ll be able to find your way back to the real world after your underground visit…