In Venice and in Grand Style: the Art of Damien Hirst 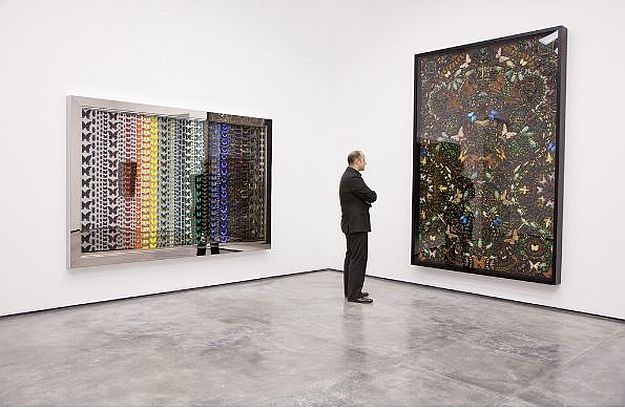 “The aim of art is to represent not the outward appearance of things, but their inward significance.” Aristotle, the ancient Greek philosopher, enunciated this, and would probably have upheld this view if he had seen the artwork of Damien Hirst, one of the most famous creators of contemporary art and reportedly the United Kingdom’s richest living artist. Or would he?

Damien Hirst’s production has divided the contemporary art experts, critics, collectors, curators and amateurs for the last three decades, and found worshippers and detractors like few other contemporary artists. Many are still scratching their head when they come face to face with “The Physical Impossibility of Death in the Mind of Someone Living” (1991), a tiger shark preserved in a transparent box filled with formaldehyde, or see “For the Love of God” (2007), a platinum cast of a human skull inlaid with more than 8,000 diamonds.

In any case, the François Pinault Foundation will for the first time combine its two exhibition venues in Venice, the Punta della Dogana and the Palazzo Grassi, to host a large number of pieces by Damien Hirst. This exceptional event, which will undoubtedly attract a myriad of visitors, will be launched on April 9, one month before the grand opening of the 2017 edition of the Venice Biennale, and be held until September 4.

If you happen to be one of our guests at our new Ca’nova apartments located right in front of the Punta della Dogana – where the Grand Canal opens out onto the famous Lagoon, – you will literally enjoy a “ringside seat” to attend this unique and much-anticipated event. Built in the 17th century and restored by Tadao Ando a decade ago, the Punta della Dogana used to be Venice’s old customs building – which was then called the Dogana da Mar, – and is located next to the Santa Maria della Salute Basilica, dating from the same period.

On the website of the Palazzo Grassi, you will find a short video providing an aerial view of these landmark buildings as well as a glimpse of our new Ca’nova residence, featured in our Trust&Travel catalogue and situated right across the Grand Canal.

Let me know whether you agree or not with Aristotle’s viewpoint on art, after seeing the Damien Hirst exhibition…