Our New Exciting Adventure in Venice (2) 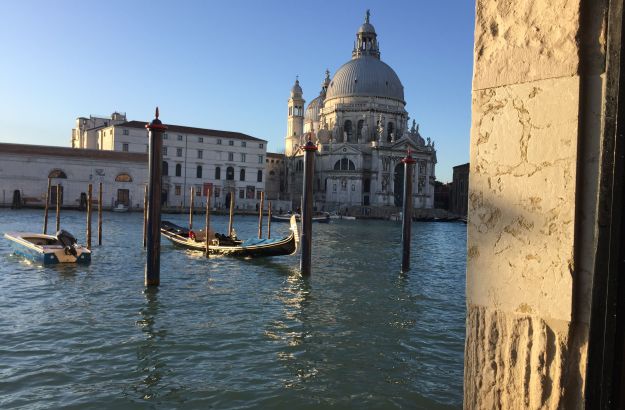 A few weeks ago, as you may remember, I started to tell you about the three outstanding apartments which we will soon be adding to our Trust&Travel rental catalogue. These three gems lie within the historic precincts of the Ca’nova Palazzo, a sumptuous building looking onto Venice’s Grand Canal and the Punta della Dogana.

The redecoration of the three apartments – supervised by the owner Marchesa Berlingieri – will soon be completed. This work has been a very enjoyable and rewarding experience for my collaborators and I. As I hinted in my March 7 article, we have been aiming at a classic look with a contemporary twist, using a palette of colours drawing its inspiration, for the most part, from the frescoes painted by the great Giambattista Tiepolo in the 18th century.

Right from the start, influenced by the large white draperies on Piazza San Marco, we chose to have most upholstery in white. We then added touches of typically Venetian colours via the cushions, lamps, pictures and borders at the bottom of the curtains. We have been working with a superlative upholsterer, Giuseppe Fuolega, a man who understood perfectly well what we had in mind from the outset and who came up with many great ideas. Mille grazie, Giuseppe!

We also came across a wonderful linen producer in northern France, close to the Belgian border. I will definitely write a blog post on this old weaving company, founded in 1835. But in the meantime, here is the link to their website: www.lindefrance.com.

One of our sources of inspiration was the craftsmanship of Flemish decorator Axel Vervoordt, especially the superb work he did for the two Labèque sisters piano duo and for his very own Venetian palazzo. We have also been able to use, in the furnishing of the apartments, many of the beautiful antiques kept in the Ca’nova Palazzo – an extra touch of class, as you’ll see!

There will be a third and final part to this exciting story, so stay tuned!