A Feast for the Eye and the Blessed Memory

Fun with kids, Life at the villa, Things to do, Venice 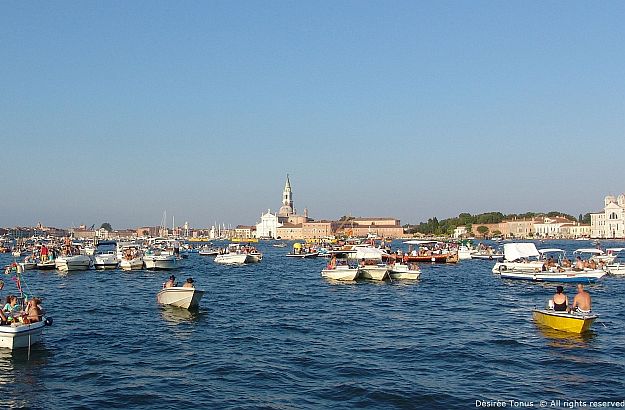 It was last summer, during my very first visit to the Ca’nova Palazzo. At one point, escorted by the delightful owners of the premises, I walked into one of the spacious rooms and uttered under my breath: “Wow!” Then I glided over to the window opening onto the Grand Canal and went again, but in a louder tone this time: “Wooow!”

I had seen before, of course, countless times, the Grand Canal, the Punta della Dogana, the Island of San Giorgio Maggiore… But not from that window, and not during the vibrant and kaleidoscopic Festa del Redentore, a large-scale and colourful event taking place in Venice every year on the third weekend of July, and which was unfolding right there before my dazzled eyes.

The Serenissima has been celebrating the Festa del Redentore (the Feast of the Holy Redeemer) for more than 400 years. It was instituted to thank the Most High for the end of the horrible Black Death of 1575, which exterminated more than 50,000 people, including Titian, the legendary painter. The Doge of the time asked Andrea Palladio to build a magnificent church, the Santissimo Redentore, in which a mass has been annually celebrated since, on the third Sunday of July, in commemoration of the historic plague and the deliverance from its deadly jaws.

Since the erection of the Redentore church, a bridge made of juxtaposed barges has been put up each July to allow the procession of visitors and devotees an easy crossing of the Giudecca channel. And for the giant fireworks organized on Saturday night, hundreds of small private boats, festooned with balloons and garlands – and stocked with plenty of wine and Venetian cicchetti – congegrate in the bay of San Marco. Quite a sight to see!

And you probably won’t find a better place to enjoy this grandiose spectacle than from the windows of our new Ca’nova Palazzo apartment Borsato. To get a foretaste and preview, simply follow this link…