The Church of Santa Chiara 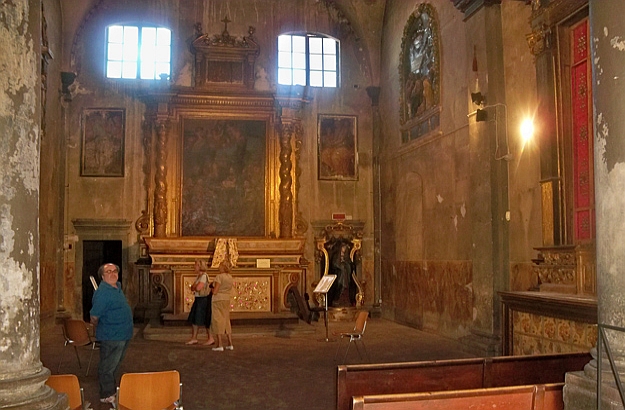 Off the beaten track… This is where I need to venture once in a while. And usually I don’t regret it: more often than not I get to run into something that makes a strong, positive and lasting impression on me.

My husband, daughter and I were spending a week in Il Mulino, one of the Tuscan farmhouses featured in our Trust & Travel rental catalogue. It was particularly sweltering, I have to admit. My husband and daughter just felt like lazing around the swimming pool, which I could very well understand. But for some reason I wanted to get out there and do some vicinal exploration despite the heat. So I decided to do it. On my own.

My instinct led me to the neighbouring town of Monte San Savino, historically one of the first urban settlements in Tuscany. I had been there before to do some shopping and have an ice cream with my daughter.

Halfway between Siena and Arezzo, Monte San Savino has retained the medieval aspect of its origins – and managed to stay clear of the negative effects of tourism. Aside from its genuine Italian charm, it has a nice coffee house, a beautiful Renaissance town hall and some interesting vestiges of its old ramparts. It also has a very well-kept secret: its small church.

I discovered the Santa Chiara church on the day of my solitary excursion. Its large double door had been left invitingly open. How could I resist the temptation! So I walked in and, much to my surprise, entered an unexpected, spellbinding world…

The tranquil, dimly lit and somewhat decrepit premises were empty except for two English ladies who were looking in all directions, filled with wonder, like me. There was also a funny Italian man who appeared to be a self-appointed guide. He turned on the lights so we could see better, then walked up to me. Unfortunately, he had a little speech impediment, so I couldn’t quite understand him. But he began to show me around.

One could see that a lot of thought had gone into the decoration of Santa Chiara. My wide open eyes went from the main gilded altar and the two side altars to the beautiful wall paintings in lovely shades of green and red. I then stared up at two very nice ceramic reliefs. One of them was a finely sculpted Nativity enhanced with a garland of miniature lemons surrounding the scene. My Italian “guide” burbled that it had been made in 1509 by no one lesser than Luca della Robbia the Younger, whose works are treasured by many museums. Then he lifted a curtain that was closing off the space below the right-hand side altar, and let me see an antique, beautiful Nativity scene with sculpted and painted figures.

He pulled the curtain back down and, seeing the big smile on my face, candidly stretched out the palm of his hand, his head tilted on one side. I was more than happy to give him a coin.

And I’m sure you’ll be too when you drop by Santa Chiara!