Art & Culture, Life at the villa, Things to do, Tuscany 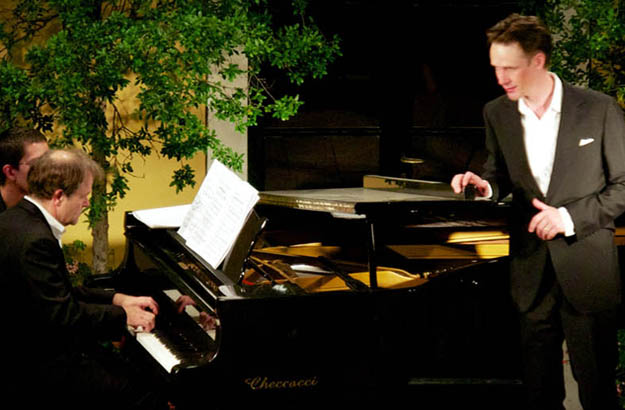 My father and I were simply mesmerized, like under a spell. We looked at each other with a funny smile, and then stood up to join the applauding audience.

A splendid interpretation of Arnold Schönberg’s “Transfigured Night” had just been handed to us, so to speak, on a golden plate. Aside from the beauty of the music itself, the venue and general ambience could not have been filled with more magic. The concert had been organized just before nightfall in the courtyard of the Castellucio, a medieval castle built around the XIth century at the summit of a hill rising on the historic estate of La Foce.

Every summer, a series of chamber concerts are performed at La Foce to enthusiastic audiences. The event is called the Incontri in Terra di Siena, and considered one of the highlights of the classical music summer season in Tuscany. According to the Financial Times, it is “one of Italy’s most adventurous summer music festivals”. It attracts performers of the calibre of Vladimir Ashkenazy, Ian Bostridge and the Tallis Scholars.

The Incontri in Terra di Siena, now at their 25th edition, were founded by Iris Origo’s daughter Benedetta Origo and her son Antonio Lysy, a Grammy award winning cellist and composer who grew up at La Foce and who now teaches at UCLA in Los Angeles. The 2013 season will be opening on 19 July and running until 28 July.

One of the popular features of this festival is the pre-concert “Beyond Music” events: buffet dinners, wine and olive oil tastings, lectures, exhibitions and the guided tours of the beautiful La Foce garden. The post-concert dinners, like the one my father and I enjoyed after the Pierrot Lunaire performance – an incredibly good dinner, by the way! – are also greatly appreciated by the festival participants.

I had never been to La Foce before this Schönberg concert, and at the time didn’t suspect in the least that this unique estate would become, years later, the launching pad of my own venture, Trust & Travel. We never know what life has in store for us!

So, if you happen to be in Tuscany in the second half of July, make sure to go to the Incontri in Terra di Siena  festival at least once. You’ll love it! Tickets for the concerts are 25 € if you’re 25 or over, and just 10 € if you’re under 25. You will find all the details here: www.itslafoce.org

On April 27th, La Foce is organising a fund-raising full day programme to support the festival. You will be given a private tour of the garden by one of the Origo family members, followed by a concert, a deliscious buffet lunch and a fund raising auction. The fee is €100 per person. If you are in Tuscany at that date, this would be an excellent way to experience the region beyond the usual tourist tracks. Get in touch with us if you want to subscribe!