Italian Impressionism at the Villa Gioli 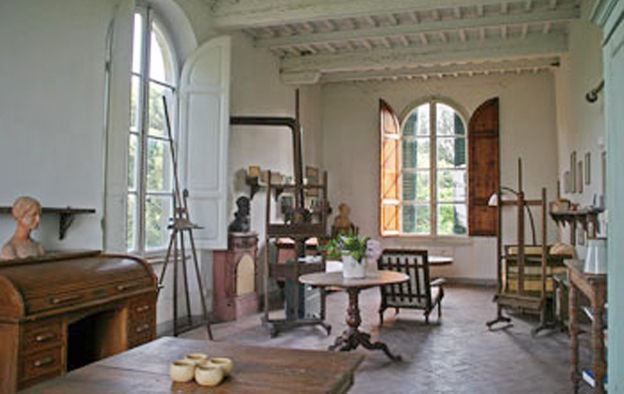 “Painting is just another way of keeping a diary.”

This beautiful phrase hasn’t just come right off the top of my head – even though I think it might have if I had been lazing around in a field of flowers with intoxicating scents… No, this is something Pablo Picasso said.
Today I am going to speak to you about art, and particularly about the riveting “pictorial diary” which the walls of one of our Trust & Travel villas, the Villa Gioli near Pisa, are literally, and tastefully, covered with. Dozens and dozens of artworks  – paintings, drawings, sketches – which give the premises an atmosphere that is hard to describe, and which I am really fond of personally.

I was 18 when I first arrived in Florence. I quickly got into the habit of hanging out in cafés. One of my favourite was the Giubbe Rosse, right in the town centre. I soon discovered that the “rebellious” Macchiaioli  used to meet there in the second half of the 19th century. They were a group of Italian painters who had broken with the old conventions advocated by the Italian art academies. They liked painting outdoors and aimed at capturing light, shade and colour in a way very similar what the French Impressionists pursued. The vast majority of them, however, received very little recognition during their lifetime, unlike their French cousins. A few of these painters had also been active revolutionaries in the Italian uprisings of 1848. Yes, revolutionaries! The 18 year-old preppie that I was liked revolutionaries. Or at least liked to think that this was a cool thing to be – even though she didn’t feel within herself any such propensity.

Anyway, many years later, I was visiting the Pitti Palace (a great Florentine museum) when a group of paintings depicting “familiar” landscapes caught my attention. The name of the artist took me aback: Francesco Gioli ! A forebearer of the owners and occupant of the Villa Gioli, which I was now taking care of for Trust & Travel! Seeing the works there at the Pitti Palace made me aware of the Villa Gioli’s artistic and historical importance.

The Gioli brothers, Francesco and Luigi, were two prominent members of the Macchiaioli. Many of their works were exhibited at the Venice Biennale (initiated in 1895) and at some Parisian salons. The Villa Gioli itself, originally built around 1700 in the middle of a tranquil countryside, served as an inspiring refuge for the rebellious Macchiaioli artists, namely Silvestra Lega, Giovanni Fattori and Telemaco Signorini. The tower of the Villa Gioli served as athe Gioli brothers’ studio.

Whether you have the soul of a revolutionary or not, you will not remain impervious, I’m sure, to the charm of the Villa Gioli and to the beauty of the art it shelters. You will definitely make the trip, won’t you?