Italian Bread that is 3000 Years Old 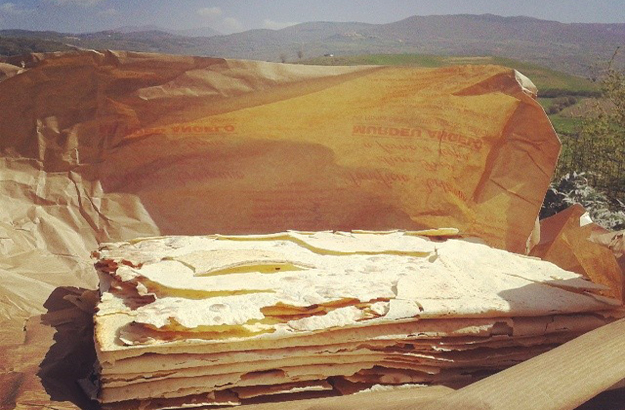 “Is there anything you’d like us to bring you back from our trip, Katharina?”

That was last month. The day before friends of mine would leave for Sardinia. They wanted to bring me back a souvenir from the second largest island in the Mediterranean Sea.

Well, it didn’t take me long to think of something: “How about some pane carasau ?” I asked my friends as they were packing. To me, nothing has ever conjured up images of late night dinners with a gorgeous view of the Mediterranean like pane carasau does.

A traditional flat bread from Sardinia, pane carasau is thin and crisp, and usually has the shape of a dish half a meter wide. It is made by separating baked flat bread – made of durum wheat flour, salt, yeast and water – into two “sheets” which are baked again for extra longevity. The recipe is very old, and was first elaborated for shepherds, who had to stay away from home for months at a time. Pane carasau can last up to a year if it is kept dry.

Remains of the bread have been found in archeological excavations of old Sardinian stone buildings. Some of them have been dated at around 1000 BC!

The name of the bread comes from the Sardinian word “carasare”, which refers to the second baking of the bread. Pane carasau is also called sometimes carta di musica (music sheet) in Italian, because of the noise it makes when you break it.

My friends came back from their Sardinian trip with a three-kilo parcel of pane carasau. Half of it was gobbled up on the next day at a dinner party.

Pane carasau can be enjoyed in a number of ways. With a bit of salty butter and a glass of chilled white, for instance. It can also be eaten dry or wet (with water, wine or sauces). I also heartily recommend one of my favourites: a salad made with pane carasau, spring onion, arugula, tomatoes, olives and tuna. And don’t forget to moisten the bread with water on one side, to add salt and pepper, and a lot of olive oil (more than you would use for any other type of salad). Let this magic mixture sit for half an hour. I’m sure you’ll love it!