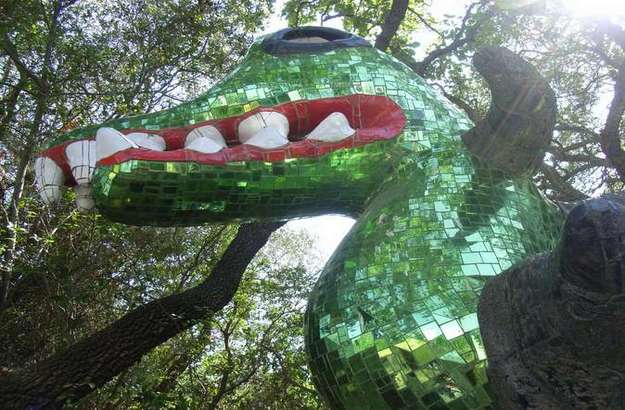 It was a very special day indeed. Special evening, I should say. It was high summer. The Italian sky was slowly turning into gold and copper, as it so often does at the end of the day. The air was sparkling and heartwarming.I was with my husband and daughter, and there were very few other people around. Within the space of just two hours, the three of us got to meet the Emperor and the Empress, the Magician and the High Priestess, the Hierophant and the Devil. We also climbed the Tower, spun the Wheel of Fortune and reached for the Star…

No, dear readers, I’m not raving. We actually did these things and saw these  “cool people”, all of them in one single place. And you will have the same memorable experience when you go there yourself, I promise.

On the coastline of Southern Tuscany, in the scrubby hills surrounding the village of Capalbio – and so within easy reach of our charming vacation villas in the Maremma area –  lies the spellbinding Giardino dei Tarocchi, the Tarot Garden, an open air art exhibition that features 22 monumental sculptures created by acclaimed artist Niki de Saint Phalle. Each of these kaleidoscopic sculptures represents one of the 22 cards of the tarot’s “Major Arcana” card deck. For those of you who are not familiar with the tarot, the Major Arcana cards evoke the joys and sorrows that we, humans, experience in our lifetime. More or less the human drama illustrated in 22 cards…

Influenced by Gaudí´s Güell Park in Barcelona and the Monsters’ Grove in Bomarzo, the Tarot Garden is one of Niki de Saint Phalle’s major works. A unique cross between an outdoor museum, an amusement park and a fantasy world, the Tarot Garden opened in 1998 after more than 20 years of work and considerable investments. It has now become what the artist intended it to be right from its inception: a little Eden where Man, Art and Nature would meet and blend together.

The Garden’s sculptures are all “interactive”, that is meant to be played with. Something youngsters always appreciate. Grown-ups as well, mind you, because I did interact with them quite a lot – climbed them, walked around them, pervaded them… In a video interview she gave about her Tarot Garden, Niki de Saint Phalle said: “I love it when people touch everything. It is part of the garden not only to look but to touch and feel.” Like touch and feel, among other things, big busty females flouncing in a fountain… Any takers?

The Giardino dei Tarocchi  is open from April through October, and to preserve the garden’s magical space and atmosphere, the number of daily visitors is restricted. You can find more information on the Tarot Garden website.