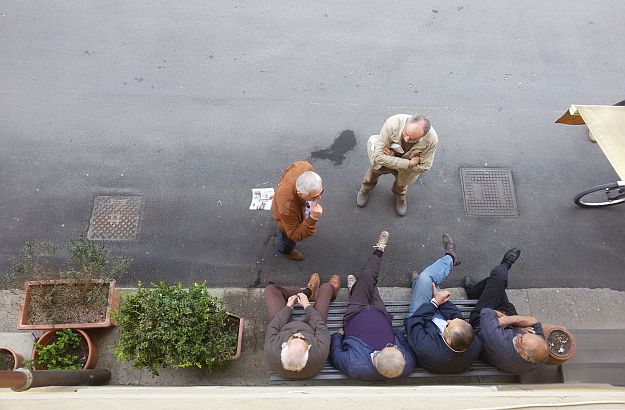 “And that is how Italians are. So terribly physically all over one another. They pour themselves one over the other like so much melted butter over parsnips. They catch each other under the chin, with a tender caress of the hand, and they smile with sunny melting tenderness into each other’s face…”

This vivid, inspiring depiction was committed to paper almost a hundred years ago by D.H. Lawrence, the famous English novelist.

Since the present article is mainly about “proper behaviour” in Italy, I would be tempted to give you, as a starter, this important piece of advice: when you meet an Italian national for the first time, don’t catch him or her under the chin, even with a tender caress of the hand; don’t pour yourself over them like melted butter over whatever. Chances are you’ll be in for an unpleasant surprise if you do.

Italy has remained to this day, overall, a pretty formal society. A lot of things have to be done in a certain way and in a certain order when you are in a social context. Here are a few tips to help you shine in company and avoid awkward moments. A future article will complement this one with language issues and the words and phrases every visitor to Italy should know.

Sustenance being one of the top concerns of Italians, here are a few things you may want to keep in mind regarding meal times and food customs. Most restaurants and bars have specific opening hours, and systematically close in the afternoon. I suggest you have your meals when Italians have theirs: from about 1 to 2 pm for lunch, and around 8 or 8:30 pm for dinner. Be aware that the further south you are in the Bel paese, the later the locals start eating. As for coffee, a rough rule of thumb is: take an espresso at the end of your lunch or dinner, after dessert, and a cappuccino at breakfast or any time in the morning.

In restaurants, a cover charge of one or two euros per person, known as coperto or servizio, intended as a tip and a “bread fee”, will be automatically included in your bill. Leaving an extra tip amounting to 10% of the check is however recommended.

Speaking of gratuities, when you leave a villa or an apartment which you have rented for your holidays, you might like to consider adding 5% to the amount of the rental. This tip, entirely at your discretion, will be shared proportionately among the staff.

And guess what, you’ll be tenderly caught under the chin when you say your farewells…

PREV
NEXT
PREV
NEXT
MOST POPULAR POSTS
NEWSLETTER