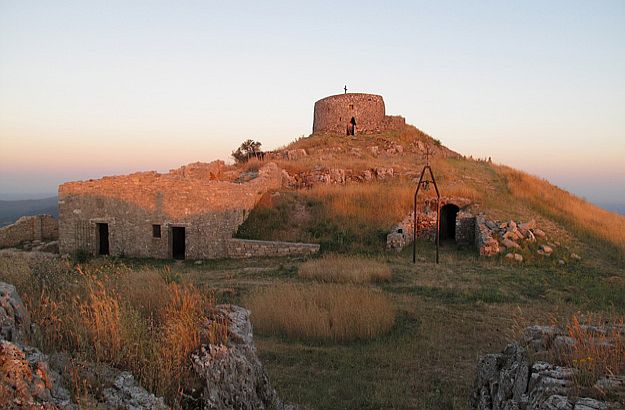 I have mentioned Tuscany’s highest mountain, Mount Amiata (1738m), several times in some of my previous articles. I have never told you, however, about its neighbouring Monte Labbro (1193m), which stands solitary off the southwest slopes of the stately Amiata. It is a hauntingly austere place with bleak, unhospitable terrain. But astonishing man-built structures await the visitor who makes the effort to climb the rough one-lane access track that leads to its craggy, windswept summit.

Daria Cervini, the owner of the Vivo d’Orcia, one of our Trust & Travel estates, took me there once. That’s when I first found out about Davide Lazzaretti, who used to be nicknamed Tuscany’s “outlaw prophet”.

Born to a poor family in 1834, Davide Lazzaretti claimed, as a young man, to have had visions of a religious nature. His unwavering stand in favour of a “Christ of the Poor” pitted him against the local establishment and land-owners. He was imprisoned a few times on charges of apostasy.

With his followers, he undertook to build at the summit of Mount Labbro a dry-stone circular structure, the Torre Giurisdavidica, a small church, and a gathering place where he could seek refuge and expound his philosophical ideas on egalitarianism. The vestiges of these constructions are open to visitors, and on a very clear day the city of Rome can be made out in the distance from the top of the Giurisdavidica tower.

In August of 1878, Davide Lazzaretti led a peaceful procession in the nearby village of Arcidosso. At one point, the defenseless group was fired upon by a local law enforcement unit. Lazzaretti was shot in the head and died. Two others also lost their lives, and fourty of his followers were wounded.

After Lazzaretti’s death, the tug-of-war continued within the Church over his religious and philosophical legacy – and there’s still some disagreement today between the different points of view. But Amiata-based devotees still try to keep alive the original flame. Every year, in August, many of them regularly make their way to the top of Monte Labbro to offer, in remembrance, a prayer, a flower or just a thought.

In the village of Arcidosso, a research center dedicated to the rehabilitated prophet has been opened, and the Arcidosso library now houses the Davide Lazzaretti museum.

I strongly recommend to you the excursion leading to the summit of Mount Labbro. It will be for you, as it was for me, a deep and unforgettable experience.