The New Casamonti Museum in Florence 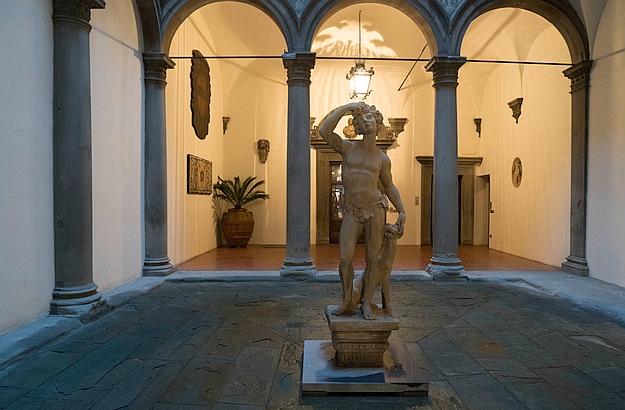 When the Eiffel tower was erected at the end of the 19th century, a big outcry was raised in Paris about the bold new monument. One could hear or read words such as “useless and hideous”, a “chimney stack”, a “truly tragic street lamp”, a “giant unsightly skeleton”…

In the early 16th century, many Florentines reacted pretty much in the same way when the Palazzo Bartolini Salimbeni was being built. In fact, it was criticized to such a degree that its architect, Baccio d’Agnolo – who had designed the palace in the manner of Roman-style High Renaissance architecture – had the following words inscribed just above its main entrance: CARPERE PROMPTIUS QUAM IMITARI (lambasting is easier than imitating).

Today, everybody agrees that the Palazzo Bartolini Salimbeni is one of the finest in town, and rejoices at the fact that its main floor is now accessible to all visitors, thanks to Roberto Casamonti, the owner of the well-known Tornabuoni art gallery. Until recently, you could only enter this gorgeous palazzo if you had the “right connections”.

Roberto Casamonti, who has always been abreast of the Italian art world, has acquired the building’s piano nobile (principal floor), where he now exhibits part of his large private art collection: works by Picasso, Warhol and De Chirico, but also by some of Italy’s most talented contemporary artists.

The museum was inaugurated with a selection of works ranging from the beginning of the 20th century to the 1960s, and which will be on show until March 2019. After that date, a new exhibition will be dedicated to more recent pieces of Roberto Casamonti’s collection.

Visits to the Palazzo are by reservation only. You can book by phone, at least 24 hours in advance, at the following number: +39 055602030; or by email: prenotazioni@collezionerobertocasamonti.com. Opening hours: Wednesday through Sunday from 11:30 am to 7 pm.