A Moment of Respite for Anyone’s Soul – Sant’Antimo 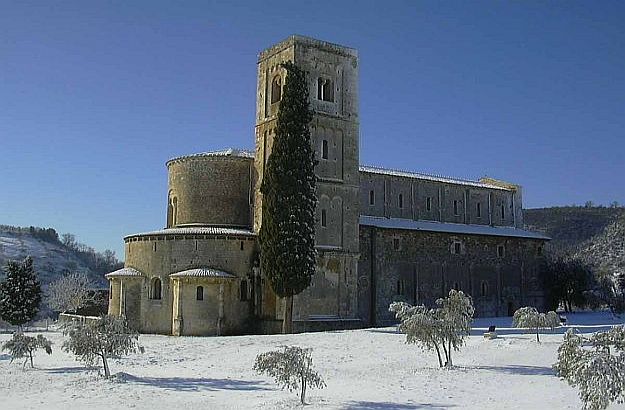 “I like the silence of a church, before the service begins, better than any preaching.”

I have always liked these words by American poet and essayist Ralph Waldo Emerson (1803-1882). Whether or not you’re a believer, I think very few people are totally impervious to the atmosphere that fills a church, especially when it is quiet and empty. Well, at least I can guarantee that you will not remain indifferent to the soothing “vibes” which permeate the Abbey of the Sant’Antimo, one of my favourite churches ever.

Since my husband and I met, we have been going to mass once a week. I truly appreciate this moment dedicated to something that is not purely practical and material. For me, it’s a great opportunity to reflect on my life, my goals and values. It enables me to explore my inner self a little deeper, and helps me understand a little better the symbols of faith such as the Crucifixion and Holy Communion.

I remember, it was a sunny, sweltering Sunday in August. My husband and I were spending a week in the Beco apartment at La Foce, in Tuscany. At the last minute, we decided to venture into new territories and go to the Sant’Antimo Abbey to attend mass.

All of our senses were dazzled and filled with wonder the minute we entered the premises. Above our heads, vapours of incense were illuminated by sun rays coming through the oblong windows, their rich scent blending with the sweet redolence of the Italian summer. Lulled by the soft Gregorian chants that were already resounding in the church, we let our eyes glide from the smooth white robes of the monks to the pale honey-coloured stones of the walls and floor. We were like kids discovering their new Christmas tree…

There was – and there still is – one special moment during the service when all participants wish peace to one another, then shake hands. It throws you off balance a little the first time you see this, but then you think to yourself: why not! Why not show the others that you care about them with a tangible and friendly gesture?

The priests and monks of the Sant’Antimo Abbey are Canons Regular living under the Augustinian (or “Agostinian”) rule. They are mainly of French origin. You can attend mass with Gregorian chants every Sunday at 11 am. It is also possible to visit the Abbey. To find out how and when, please visit this website: www.antimo.it

Wishing you peace for the week to come…