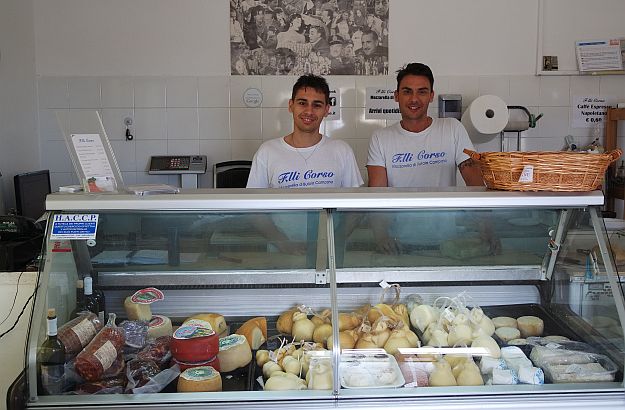 The laws or quirks of fate, call it what you want… I had driven by this former petrol station at least a dozen times before, either in too much of a hurry to drop by, or frustrated by the fact that it was after closing hours. But two weeks ago, at long last, fortune smiled on me: the store was open and I wasn’t, for once, in any big rush.

I even had the time to chat with the two shop owners, the brothers Andrea and Francesco Corso, who told me the interesting story of how they came to turn an old gas station into a retail and wholesale delicatessen store…

Francesco, as a young man, did his military service in Porto Santo Stefano, a seaport town on the west coast of Italy, in the Tuscan province of Grosseto. Each time he was on leave, he would head south and visit his family in Campania, a region which traditionally produces a savoury mozzarella made from the milk of the Italian water buffalo, the mozzarella di bufala. Francesco would always return to his naval barracks with two or three suitcases filled with mozzarella of the highest quality.

As he was driving back home one day, he spotted, strategically located along the Via Aurelia in Capalbio, an old petrol station which had just been closed down. That gave him the brilliant idea to turn his weakness for buffalo mozzarella into a business venture. With his brother Andrea’s help, he acquired and restored the old gas station, which has since been a fine grocery and eatery much appreciated by its clientele, locals and travellers alike.

At Fratelli Corso – the name of this welcoming outlet, ¬– you will find the freshest meats, oils, breads, beverages, dairy products and of course the excellent mozzarella di bufala, which is delivered daily and sold, as it should, unrefrigerated. I have personally tried, among several other foodstuffs, their delicious caprino goat cheese and the loaves of salted bread they “import” from Campania. I recommend them highly.

The shop and snack bar are open from Monday to Friday from 9 am to 7 pm. On Saturdays, they close at 6 pm, and in July and August, they open on Sundays too.