Life at the villa, Venice 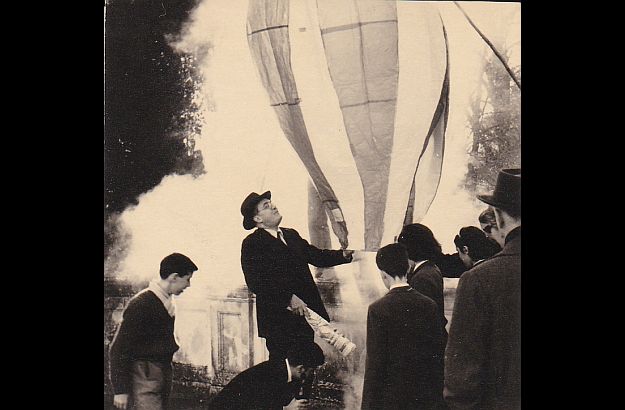 Attentive readers will not have missed the fact that I have continued my conversation with Francesca Papafava; owner of the Country Estate Frassanelle. We discussed the topics of history, tradition, the future and future aims. I asked Francesca again, what particular memories she had of her ancestors.

Francesca: Yes, as a child in Frassanelle I mainly looked up to my Grandfather.

Katharina: To what extent?

Francesca: On November 4th each year, my Grandfather celebrated the Italian Victory in WWI. The photographs are from 1955, with my Grandfather on the left, wearing a hat. The celebrations began with a hot air balloon ride. The air inside the balloon was heated so that it could rise high in the sky. The whole operation required much concentration as the balloon had to be held stable, until it was completely filled with hot air.

There was the constant threat of it collapsing, and that would have meant that the balloon would have burst in to flames. When it was windy, it was naturally much more difficult. Once it rose in to the air, Grandfather was thrilled: “this balloon is like virtue: it must fight to assert itself, and then it can’t be restrained but takes flight towards the celestial plains.”

We all followed the balloon’s flight with rapt attention. Then at some point the hot air cooled, and the balloon again descended towards the earth. Whoever found it first, received a prize. As soon as it became clear in which direction the balloon was travelling,  we all took to the chase. On foot, by bike or by car.

My sister Maria Novella and I were still small and so we never won the prize. I can’t  remember who the winners were. Generally farmers living and working on the estate, because it was they how knew the property inside out, with all it’s secret trails.)

In any case the search for the balloon was a serious matter, that occupied us for hours. In the meantime, on the Monte Olivo not far from Villa Lieta, a ton of wood was piled up, to be lit at sundown. I can still remember how the fire almost burned my face.

My uncles and the more daring amongst the farmers tried to trump it, by jumping over the fire. They had to take a very long run up, encouraged by the deafening cries of those watching.

The older people with years of experience, held blankets in case a stray spark should ignite someone’s clothing.

The day concluded at the farm; that is the dairy on the estate. We were given roasted chestnuts, wine and to finish off there was dancing on the threshing floor, to the accompaniment of an accordeon. Before the dancing stopped, everyone convened around a large table at which Grandfather gave a speech.

Many of those present had also like Grandfather, taken part in WWI and many had lost loved ones. When he got to the end of his speech, Grandfather raised his glass to toast Victory. It was then that the party could begin!