WHEN IN ITALY, LEAVE NO SITE UNTURNED 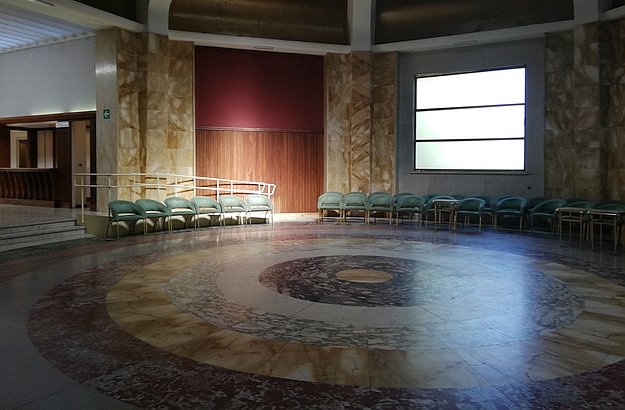 This happens to all of us: time and time again you pass by a place without ever paying much attention to it, and then one day, God knows why, you finally decide to stop and have a close look at what you’ve been disregarding for so many years.

One morning, last July, my instinct made me deflect from my usual route and call in at the Tuscan town of Chianciano Terme – which you may have heard of if you’ve ever stayed at our nearby Trust & Travel La Foce estate. Chianciano Terme had its heydays in the 50s and 60s, and the spa vacations he spent there inspired Federico Fellini with several scenes of his 1963 feature film 8½.

Today it’s hard to understand, at first sight, why Fellini had a liking for Chianciano Terme, as the leftovers of the 20th century tourism boom are countless architectural faux pas. But don’t give up, take the matter further, as I did, and head for the Acqua Santa thermal park, walk into its Salone Nervi hall and look up to the sky… The breathtaking cupola which will be spreading its cement wings above your head was designed by world-renowned architect and engineer Pier Luigi Nervi, who pioneered innovative uses of reinforced concrete.

Many of Nervi’s masterpieces are in Rome, like the sports stadium designed for the 1960 Olympics and the Pope’s audience hall at the Vatican. But a number of his achievements can also be seen abroad. He left his distinct signature on the George Washington Bridge station in New York, for example, as well as on the St. Mary’s Cathedral in San Francisco and the Assembly Hall of the United Nations in Paris.

The whole 1950s design of the Acqua Santa thermal grounds is also an architectural feast for the eye. The diverse structures in the park are in very good condition. And when you set foot in the Salone Nervi, chances are you’ll catch in the act, amorously dancing right below the stately dome, an Italian couple who has been enjoying Chianciano’s magic waters since the Fellini​an era…